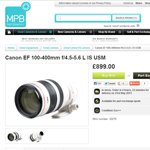 When I purchased my first camera, I went for a new one though over time, I have started to purchased used canon equipment instead.

There are lots of benefits to buying used photographic equipment. The cost is of course a lot cheaper, and you can often get a better camera or lens for the budget you have to spend.

A while back, I was trying to source a lens, a Canon EF300mm f2.8L and finally found one that was second hand in a store called Aperture UK based in London.

Rather than having the lens shipped to me, I drove down and collected it, they had a ton of used canon equipment and also other used photographic equipment, it was an Aladdin’s cave.

The other advantage I have found of buying used equipment over new is that most of the places, like MPB Photographic and Aperture UK allow you trade your old gear in against the items you are trying to buy.

In fact because I can trade gear in I no longer use ebay to purchase any of my used canon equipment instead I stick with the shops local to me, The Beverley Camera Centre and on-line stores mentioned above.

Another massive advantage to buying used canon equipment this way is that the cameras and lens often come with a six month warranty which offers some much needed piece of mind when spending hundreds of pounds on-line.

So far I have only had one issue with a camera I purchased on-line, I did contact the place of purchase, in this case MPB Photographic but I was just outside my warranty so I needed to return it to Canon.

This was  is not bad all things considered. MPB Photographic were sorry they were unable to help me, but I have since purchased further equipment from them.

In summary, purchasing used canon equipment has helped me get better gear a lot quick then I could if I was buying new.

As new models are released you often can pick up a bargain and I would happily recommend any of the companies mentioned above as a good starting point for sourcing used Canon equipment.