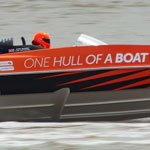 This was the first time I shot power boat racing and really got to use a Canon EF400mm F2.8L USM as with all news things, there were a few issues to iron out.

The event was a P1 Power Boat race and with it being on water, the extra light being reflected caused a few issues with setting the exposure on the camera to begin with but after watching was happening and taking a few test shots, I figured out what I needed to do to get the desired images.

With regard to the set up I used to photograph this event I had a Canon EOS 1D Mark IV with a Canon EF400mm F2.8L USM lens and from time to time I added a 1.4x extender for a little extra reach.

To get the exposure I wanted I needed I shot the whole event in manual mode and chose one of the boats in the race to be my main subject to set all my exposures on this craft. I selected a boat that was in the main white in colour and shot a few frames at various speeds and used an aperture of f3.5.

Using as a white boat also made it easy to set my colour temperature to what I wanted and using the with the Canon EF400mm F2.8L USM I could shoot at 100 ISO helping with the overall clarity of the image.

With the Canon EOS 1D Mark IV set in manual mode I settled on a shutter speed of 1/5000 which ensured the boat was frozen but still some feeling of motion and movement created as the boats travelled through the water.

After a few frames like this, I wanted to try something different. It gets quite repetitive and there was a lot of scope to be creative. I closed down the aperture to about f11 in the first instance, which slowed the shutter speed right down, and I began panning as the boats went past.

My favourite shot was achieved by slowing the shutter right down to 1/125 with the speed the boat is travelling the water has a smok effect which is very pleasing on the eye.

As well as the boats there were Jet Skis, but these were a lot harder to pan given their size, but I grabbed a couple of them too, which worked out OK.